Back in January my friend Ashley (who lives in Newfoundland) expressed interest in travelling somewhere together after her semester of University was finished and before she started her work term. We talked about going to Ireland but realized it was too expensive to do with no time to plan. We stayed on the phone for over 2 hours discussing different ideas and finally settled on a cruise. We found one that was happening on the days that she had available and we found flights that lined up with the cruise as well. We went ahead and paid for everything, planned some shore excursions, and (not so) patiently waited for April to arrive.

So the plan for Sunday was to fly to Toronto, meet Ashley there, and take the same flight to Miami. Mother Nature had other plans for us though. Toronto was experiencing a huge rain and ice storm so my flight to Toronto got delayed 8 times before they let us fly. Ashley’s flight however made it on time and she got to board the flight to Miami. I arrived in Toronto in time for my flight but was 15 minutes late for border control so I got put on the first flight the next morning. Ashley had to spend the night in Miami airport by herself and I got a hotel close to Toronto airport ($200 I really didn’t want to spend). We were both so anxious all night that I wouldn’t make it in time for the cruise. I tried my best to get some sleep before heading back to the airport for 4:30am.

When I got back to the airport in the morning, I kept checking the updates every 5 minutes to see if anything had changed. I loaded the plane on time and got a notification saying that our flight was delayed another 30 minutes (every time I got a notification, I had a panic attack. Not a fun way to start a vacation). Finally the plane started moving. There was a line up with 8 planes ahead of us as only one runway was open and it was very icy. The woman sat next to me on the plane (her name was Blanka) was extremely nice and we held hands through the turbulence. It was great to have someone so talkative sitting next to me, she told crazy stories and we drank wine to help with the anxiety. I finally made it to Miami and was reunited with Ashley! We quickly grabbed my luggage and found a van that was headed to the cruise port. There was an older couple that was in our van and going on the same cruise as us that insisted on paying for our cab fare. They were hilarious and super cute in that “fights like an old married couple” kind of way. As soon as we arrived on the ship we bought an “all you can drink” package because after all the craziness of the flights, we decided we deserved to be drunk every day. We spent the rest of the day getting sun burnt (I complained a lot but it was worth it), had a great first meal and met some nice couples, and listened to some 70s music. I also decided that I need to work on a cruise ship before I die. 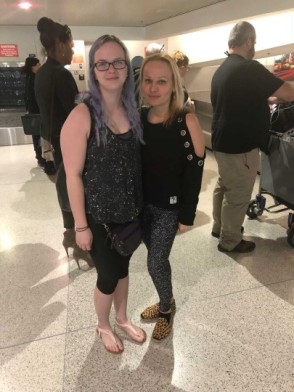 Reunited! (note how exhausted we look)

I had never been outside of North America before but I had heard lots of stories about how persistent sellers in tourist communities were. None of the stories prepared me for just HOW persistent they were, I definitely felt very overwhelmed at first. Within 5 minutes of being on shore, we were also asked if we “needed” to “buy some trees” (by the same guy trying to rent us scooters). We had no plans for Nassau but were approached by multiple tour guides, all trying to sell their experience. Dave of “Simply Dave” stood out to us, as he seemed genuine and wasn’t being naggy. If you are ever in Nassau, I highly recommend supporting his family business. He called us mermaids, laid out a mini red carpet for us to board his tour van and brushed our feet off for us after the beach. We felt like royalty for sure and he seemed to really love his job and country. As we drove around the city, everyone kept beeping their horns and I asked if we were doing something wrong. Apparently it’s a friendly greeting in the Bahamas, and not a way to get angry with each other. After our day ashore exploring the city, we went back to the ship to have a nap. We went to have some drinks and the bartender (Loue) that gave us our drink packages remembered us and invited us to his floating bar for the next day (he had a MAJOR crush on Ashley).

“Welcome to the Bahamas” 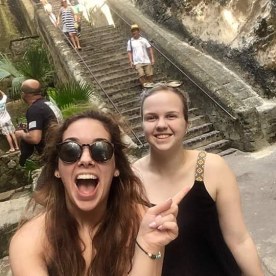 Big chair at the Atlantis Casino

Our next day was spent on a private island owned by the cruise line. It was a small island (we easily walked the whole island and back in 30 minutes). We went and visited Loue’s floating bar and saw a sand shark while we were there. Apparently there is too (Sandy & Randy) that have been hanging around the island for years and their harmless. Me and Ashley competed in a hula hoop contest, I came in 3rd place but lost to a little girl. We also competed in a limbo contest (Ashley did much better than me but again we lost to little kids). We danced on the beach and enjoyed some beverages. When we got back to the ship, we found out that our parasailing that we had booked for Key West the next day was cancelled because Donald Trump would be there, making it a “no-fly” zone (another reason to hate Trump). We got a refund and booked a parasailing trip in Miami instead, for our last day of vacation. Later that night, we went to watch “Love & Marriage”, a live marriage game show that was hosted on the ship and it was equal parts funny and cute. 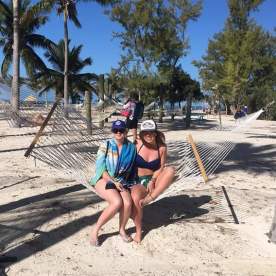 Deciding that I NEED a hammock in my life

Although parasailing was cancelled, we had booked snorkeling as well. Although I am not a strong swimmer AT ALL, I really wanted to jump off the boat and into the ocean. I thought I would be fine with my life jacket on but once I hit the water, I panicked and quickly swam over to one of the boats crewmen to hold onto his life saver. They gave me a pool floaty and then I felt much calmer and was able to enjoy the experience (I definitely need to take swim lessons). When we were back onboard, we saw a shark and a sea turtle. Once ashore we went and ate at a restaurant called “The Sand Bar”. I had some of the best mac & cheese I’ve ever had! Also, a lady wearing a military uniform walked up to us and gave us $30 worth of gift certificates to go towards our meal (people can be so giving!). When we got back onboard we made it our mission to try and find Loue so that we could say goodbye (Ashley even made me call the help desk to ask which bar he was working at). We went to every bar and had multiple drinks but could not find him. Ashley wrote him a letter and left it in the tip envelope hoping her would get it but has yet to respond to her (I’ll let you know if we ever find him).

“The Sand Bar” and my delicious mac & cheese 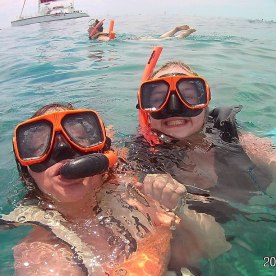 Swimming with the fishies

Back in Miami and sadly our last day of vacation. Got to check another item off by bucket list though and go parasailing! It was a lot less scary that I imagined it being. Taking off and landing were both some calm and controlled. We got to spend about 8 minutes in the air getting a great view of the city. At the end of being in flight, they dipped us multiple times into the ocean which was probably my favorite part. We taxied there but on the way back we figured out how to take the bus and skytrain which was honestly a big win for us and saved us some money. We really wanted to get tattoos but didn’t have enough time or cash left (next trip we will definitely be putting ink on our body). Once we got back to the airport we checked in and then went to eat. When we were done eating, I checked for my passport and realized I left it at check in. I went to go look for it and they were after giving it to someone else, making me wait 30 minutes and panic thinking I wouldn’t make my flight in time (did I mention I have horrible luck when flying?). I got it back and made it home in one piece. 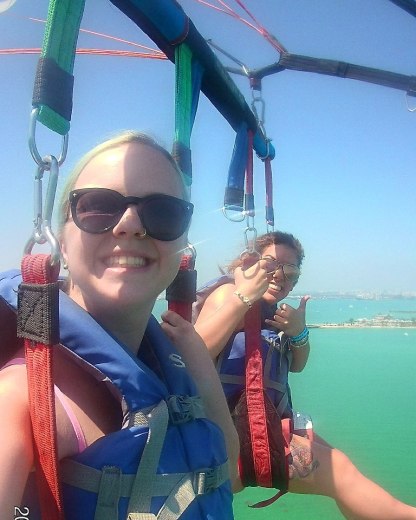 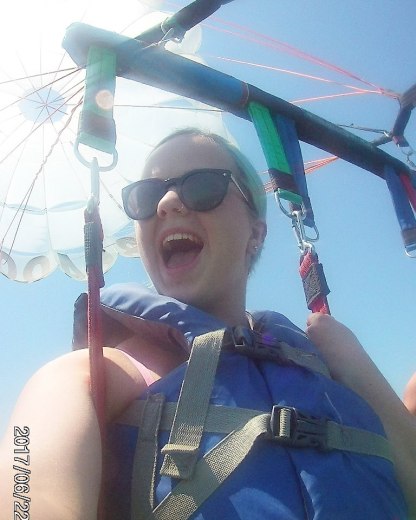 My favorite “selfie” ever

Amazing trip with a childhood friend, definitely going to try to make a tradition of travelling together. Getting to leave the country and explore just makes me realize how many places I haven’t been to yet. I have the travel itch BAD. Trying to work hard and make dreams happen, setting goals for myself has helped. Next big trip will hopefully be backpacking in Thailand with Pascal, just need to keep saving money! Also, for my trip I wanted to buy a camera that was similar to a GoPro but without the cost. I found this one

on Amazon and I loved it! I took all my underwater pictures with it and my parasailing ones as well. Served the purpose I was wanting it for and didn’t set me back hundreds! Where has been your favorite place to travel so far? Craziest travel story? I want to hear them all, leave me a comment!

The journey of a woman living in Winnipeg trying to travel the world. Follow along for hiking, backpacking experiences, and my adventures. View all posts by coasttocoast709